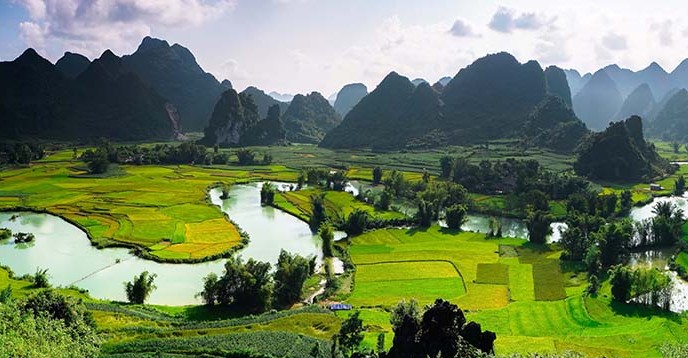 Three components characterizing the Famenne-Ardenne Geopark are clearly visible in the landscape: Famenne, to the north, is a large depression with a schistose substratum. The Ardennes, to the South, form a vast plateau mainly composed of sandstone rocks. Between the two, the Calestienne presents a calcareous bedrock, rich in karst phenomena. The karst of this region is emblematic and its geological evolution, with disappearing and reappearing rivers, sinkholes and remarkable caves, has helped fashion the Geopark’s omnipresent human activity. Limestone water is, moreover, essential in the brewing of the famous and typical ‘Rochefort Trappist’ beer.

The Percé Geopark in Canada is at the heart of the large Appalachian Mountain chain along eastern North America. The mountain formation and the magmatic and tectonic events of the area link to the opening of the Atlantic Ocean during the Jurassic and the Cretaceous periods (ca. 150 Million years ago). Over the last twenty thousand years—the last Ice Age—the Quebec segment of this chain has been submitted to the erosive action of glacial elements that gave the landscape its current shape. The territory is home to many ecosystems that feature diverse fauna and flora. Percé’s main economic activities centre on tourism, fishing and forestry.

The Guangwushan-Nuoshuihe Geopark is located in Bazhong City, Sichuan Province. Situated at the junction of the southern Central Orogenic Belt (the Qinling) and Yangtze Block, the area displays natural landscapes such as karst and tectonic landforms, waterfalls and ponds. It is an important place for the analysis of the geological evolution of peripheral basins, because of its location in the transition zone between southern and northern karst landforms. The celebrated 2,000-year-old Micang Ancient Road, connecting Shaanxi and Scihuan Province, winds through this landscape, where cultures of different dynasties and types have left their traces.

Huanggang Dabieshan Geopark is located in Hubei Province, in eastern China. It demonstrates the geological evolution of the region, notably the collision between the tectonic plates of North China and the Yangtze. The oldest continental nucleus of the mountain belt, which resulted from this collision, is a combination of a garnet-biotite-gneiss and greenstone belt (Muzidian Group). These rocks were formed under high pressure and high temperatures and are more than 2.8 billion years old. The biological diversity of the region makes it one of China’s Seven Major Gene Pools.

The Beaujolais Geopark is located in a region of France known around the world for its twelve protected vineyard appellations. But Beaujolais country also features other remarkable geological and culture treasures. The Beaujolais’ complex geology, formed over 500 million years, underpins a diversity of landscapes, natural habitats and building stones used in local construction. The geological heritage and history of the Beaujolais has influenced the lives and culture of its inhabitants, in the past and continues to do so.

Ciletuh-Palabuhanratu Geopark in West Java, is named after the Ciletuh River and Palabuhanratu (Queen harbour), in reference to the legend about a South Ocean Queen who was said to be the guardian of the area. The oldest rocks in the Geopark were formed by the subduction process between the Eurasian and the Indian Ocean tectonic plates. Currently three village communities maintain their ancestral Kasepuhan traditions, notably in agriculture and paddy farming (called tatanen).

The nearly circular-shaped Lombok Island with its 70-kilometre ‘tail’ of a peninsula, is one of the Sunda Kecil Islands, located between Bali and Sumbawa. The geology of Lombok Island is dominated by Quaternary calc-alkaline volcanoes covering the Neogene clastic sedimentary rocks, the Oligo-Miocene volcanics and the Palaeogene-aged intrusive igneous rocks. The formation of the volcanic complex is due to the subduction of the Indian Ocean tectonic plate under the edge of the South East Asia tectonic plate. The Sasak population of Lombok is multi-ethnic and multicultural. The diversity of the Sasaks’ cultural heritage is reflected in buildings such as temples and old mosque.

Izu Peninsula Geopark is located in the southeast of Honshu Island. It is a unique meeting place of two active volcanic arcs and various and ongoing phenomena linked to tectonic plate collision. The area’s uninterrupted volcanic history over the past 20 million years is unmatched anywhere. Geothermal activity has also endowed this area with some of Japan’s most famous hot springs. Izu has witnessed many natural disasters, such as volcanic eruptions, earthquakes and tsunamis, which have contributed to local beliefs as communities began to worship deities that were supposed to rule over natural forces and built over 90 shrines scattered across the Geopark.

Mudeungsan Area Geopark is centred around Mudeung mountain, which towers high above Gwangju city. The mountain has long occupied an important place in the spiritual world of the people of Jeollanam-do, the former Honam, who see mountaintops as altars for celestial worship. Its geoheritage ranges from large polygonal jointed tuff columns, recording at least three phases of Cretaceous volcanic activity, extensive periglacial-produced landforms, unusual microclimatic environments, dinosaur footprints and trackways, and a variety of other geological and geomorphological features.

Conca de Tremp Montsec Geopark in north-eastern Spain, close to the borders of France and Andorra, is characterized by a set of East-West oriented mountain ranges and basins. This alignment corresponds to the various overthrust nappes making up the southern slope of the Central Pyrenees. The geological record covers the past 550 million years. The rich natural heritage of the southern slopes of the Pyrenees is internationallyrecognized as a natural laboratory for sedimentology, tectonics, external geodynamics, palaeontology, ore deposits and soil science. The area includes a very broad representation of the evolution of life on Earth and includes sites from the Permian to the Palaeogene: fossils of vertebrates, invertebrates and plants.

One of the most important features of the Ngorongoro Lengai Geopark is the Ngorongoro Crater, home to great wildlife diversity, such as elephants, black rhinos, lion, gazelles, and other large mammals that co-exist with humans. The Oldoinyo Lengai ‘Mountain of God’ or ‘Holy Mountain’ in the Maasai language is the youngest and most active stratovolcano (2,962 m) of the Ngorongoro Volcanic Highland located at its northern end. This volcano produces natrocarbonatite lava that contains almost no silicon, which is unique. The Olduvai Gorge, the most important paleoanthropological site in the world, has volcanic beds formed in the Pliocene Epoch with an unsurpassed record of past environments, including hominid fossils, as well as Middle and Late Stone Age artefacts and a wide range of fossilized fauna.

Satun Geopark is known as a peaceful place of great natural beauty. Multiple cultures and groups, including Buddhists, Muslims, Christians, and smaller groups, such as the Semung or Maniq and Urak Lawoi (or Chao le in Thai language), live here together in harmony in this area. It is well known as the land of Palaeozoic fossils due to their abundance, high diversity and remarkable succession of fossil including trilobites, brachiopods, stromatolites, conodonts, graptolites, tentaculites and nautiloids. The inhabitants’ main economic activities centre on agriculture, fishery, tourism, and small local business.

The Cao Bang Geopark in a mountainous area in the northeast of the country. Geologically Cao Bang Geopark can be divided into two distinct parts by the so-called Cao Bang-Tien Yen deep-seated active fault. The eastern part of the area is composed of Palaeozoic limestones. The western part features sedimentary rocks, pillow basalts, ultra-mafic and granitic intrusions rich in minerals and hydrothermal alterations. The majority of its population belongs to one of nine different ethnic groups with distinct, rich cultural identities and traditions.

The UNESCO label helps designated sites and their inhabitants enhance the value of their geological and human heritage and boost awareness raising activities. It also serves to share experiences and best practices within the framework of the Global Geopark Network.