Langkawi Geopark is Malaysia’s first geopark and is located in the far northwestern corner of peninsular Malaysia. Located in northern State of Kedah, it is unique in the sense that it was formed on 99 islands that together made up the legendary Langkawi Archipelago about 30km from Kuala Perlis on the mainland. The main island is Pulau Langkawi. The archipelago has some of the world’s most pristine rainforests, limestone and karst formations, caves with stunning stalactites and stalagmites, and among the world’s most beautiful beaches washed by clear emerald waters teeming with marine life. 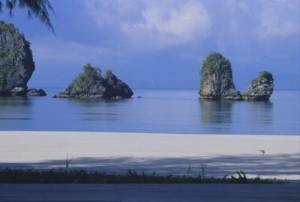 The island of Langkawi is an exotic holiday destination that offers world-class accommodation and amenities sitting side by side with idyllic beaches, ancient rainforests and quaint villages. Langkawi, part of the State of Kedah, was named after the eagle (helang in the Malay,language – pronounced ‘Lang’), hence the imposing eagle statue at Dataran Lang (Eagle Square), welcoming visitors who arrive on the island through the Kuah Jetty.

The rich marine life not only makes Langkawi a diver’s paradise, it also nurtures the curative sea-cucumber (known locally as gamat), which is synonymous to the island. Especially memorable is the warm hospitality of the locals. Friendliness is an infectious lifestyle in Langkawi.

Langkawi is a duty-free shopping destination. Other than cameras, branded items, electronic gadgets, shop for lovely silk batik, handicraft and local products, especially those from the fishing villages. The legend of Mahsuri weaves the history of Langkawi from the past seven generations.. It tells of Mahsuri, a fair maiden who was unjustly accused of adultery. She was said to have bled white blood at her execution as a sign of her innocence. With her last breath Mahsuri was said to have laid a curse on the island — that it would remain barren for seven generations.

Legend or myth, seven generations have since passed and today, Langkawi is an island much loved by the locals and international tourists. The island is also a choice venue for international sporting events such as the Le Tour de Langkawi bicycle race, Royal Langkawi International Regatta, the F3000 Powerboat Race and Ironman, among others.

The total land area of Langkawi Geopark is about 478km sq.

It is accessible by sea from Kuala Perlis , Kuala Kedah and Penang jetties or by air from Kuala Lumpur, Penang, Singapore and Bangkok.

Langkawi has been dubbed as the birthplace or the fetus land of the region. The various natural landscapes of Langkawi reflects the island’s geodiversity and its complex geological history. It has the best-exposed and most complete Palaeozoic sedimentary sequence in Malaysia beginning from Cambrian to the Permian period. Later during the Mesozoic, the islands underwent a major tectonic event that resulted in the emplacement of its numerous granitic igneous bodies.

This incredible power generated by nature from the deep mantle beneath the earth has driven up huge blocks of older rocks and somehow placed them above a very much younger terrain.

In Langkawi geological history, much of its geological development was somewhat linked to what had happened in the old supercontinent Pangea and southern hemispheric Gondwanaland since more than 550 million years ago. It started in the deposition of Machinchang sandstone in a lacustrine environment during much of the Cambrian time, followed by the submergence of the land during Late Cambrian time (–500m.y.) which allowed the invasion of shallow marine fauna into the proto-Langkawi sea. The continuous subsidence of the sea floor resulted in the formation of thick limestone of Setul Formation during the Ordovician. At the end of Ordovician time (–440m.y.), the sea became too deep to eventually stop the limestone deposition temporarily.